Perhaps it should have been unsurprising at an event welcoming arms-dealers… However, we didn’t expect to hear a delegate attending a “Distinguished Executive” event organised by the University of the West of England to shout ‘what if they came over here and raped you’. The event entitled ‘Global Innovation – Boeing and the UK‘. was celebrating 75 years of partnership between the arms dealers and the UK. 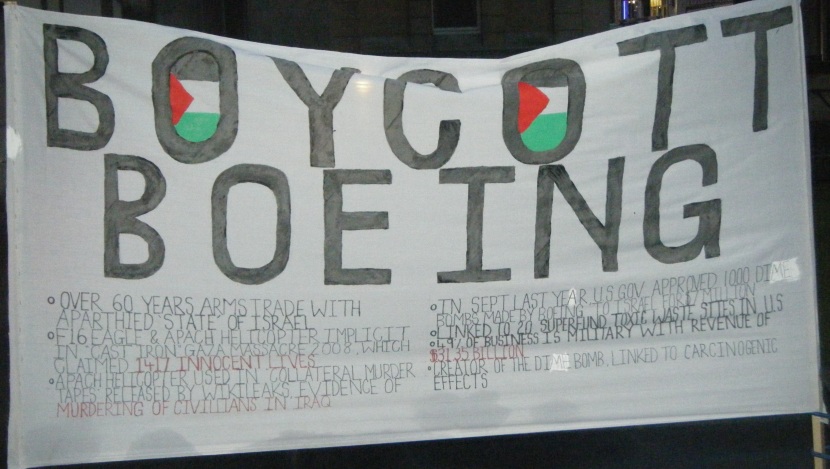 On Thursday 7th March delegates arriving to hear Boeing UK’s president, Sir Roger Bone, speak in City Hall (aka The Council House) were stopped at a checkpoint set up by anti-arms protesters who accuse him of selling arms used to commit human rights violations. The protesters, linking Palestinian politics in with their campaign, set up a checkpoint as well as giving out information to passers by and projecting video footage of Boeing tech being used to kill. Delegates were told that they needed passes to enter if they were Palestinians. When one woman asked how a delegate felt about Boeing’s use of weapons in Afghanistan, Palestine and elsewhere he gave the vulgar response “How about if they came over here and raped you?” The man managed to avoid a fat lip due to the number of press cameras about and cops stepping in to get him on his way. Apart form this highly unpleasant episode the demonstration was positive and peaceful (unlike the aims of Boeing). 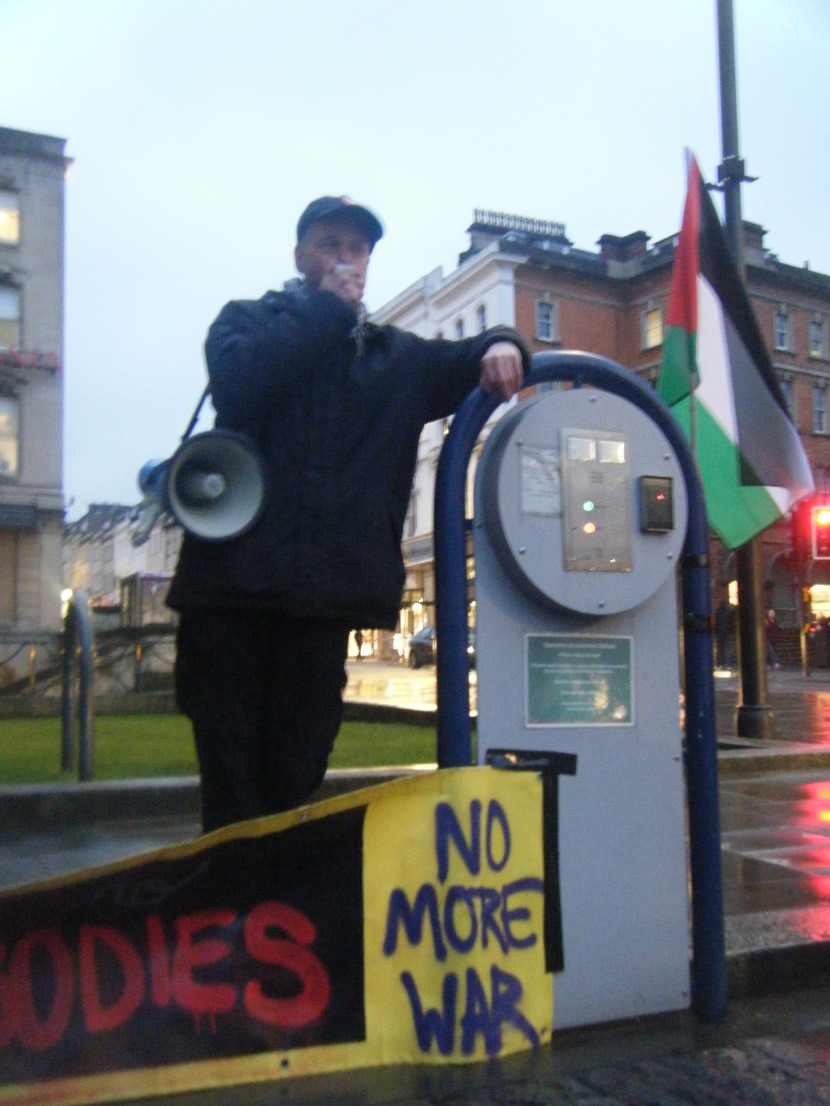 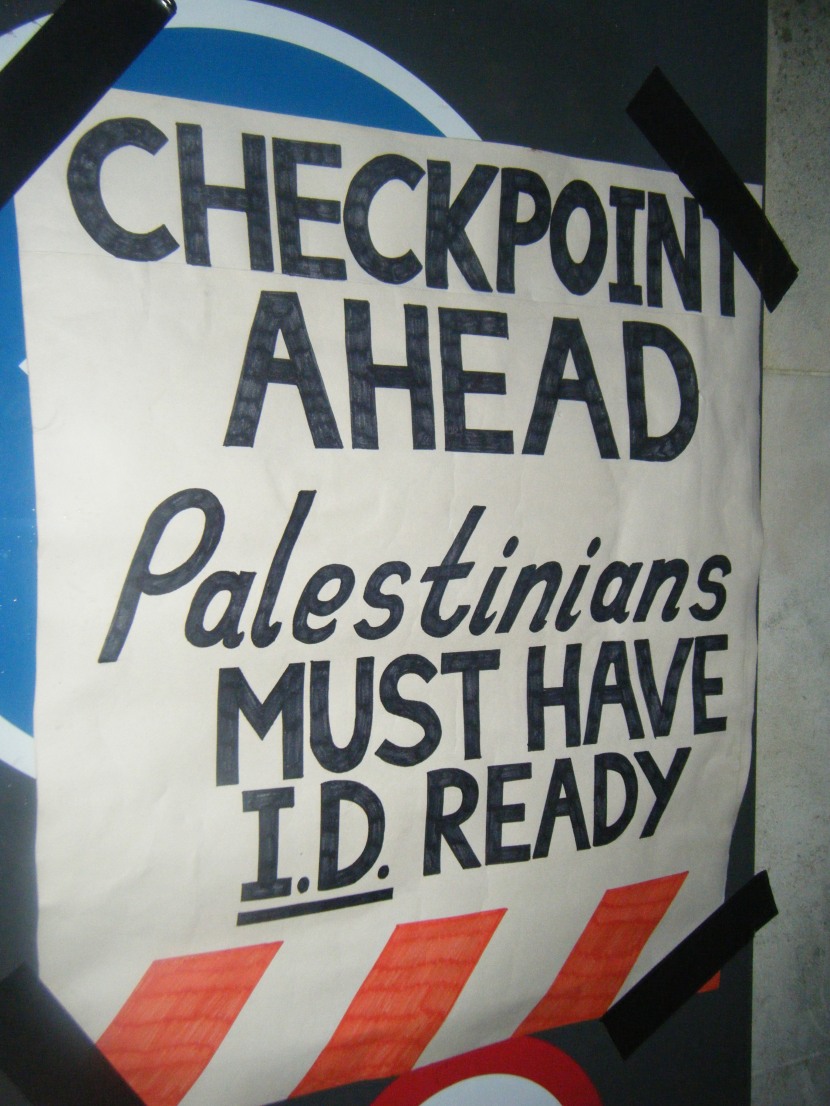 Two protestors dressed as Israeli border guards stopped delegates on their way into the venue, asked them for ID and then questioned them on the role of Boeing in equipping the Israeli Defence Force whose border guards routinely harass and assualt palestinians. 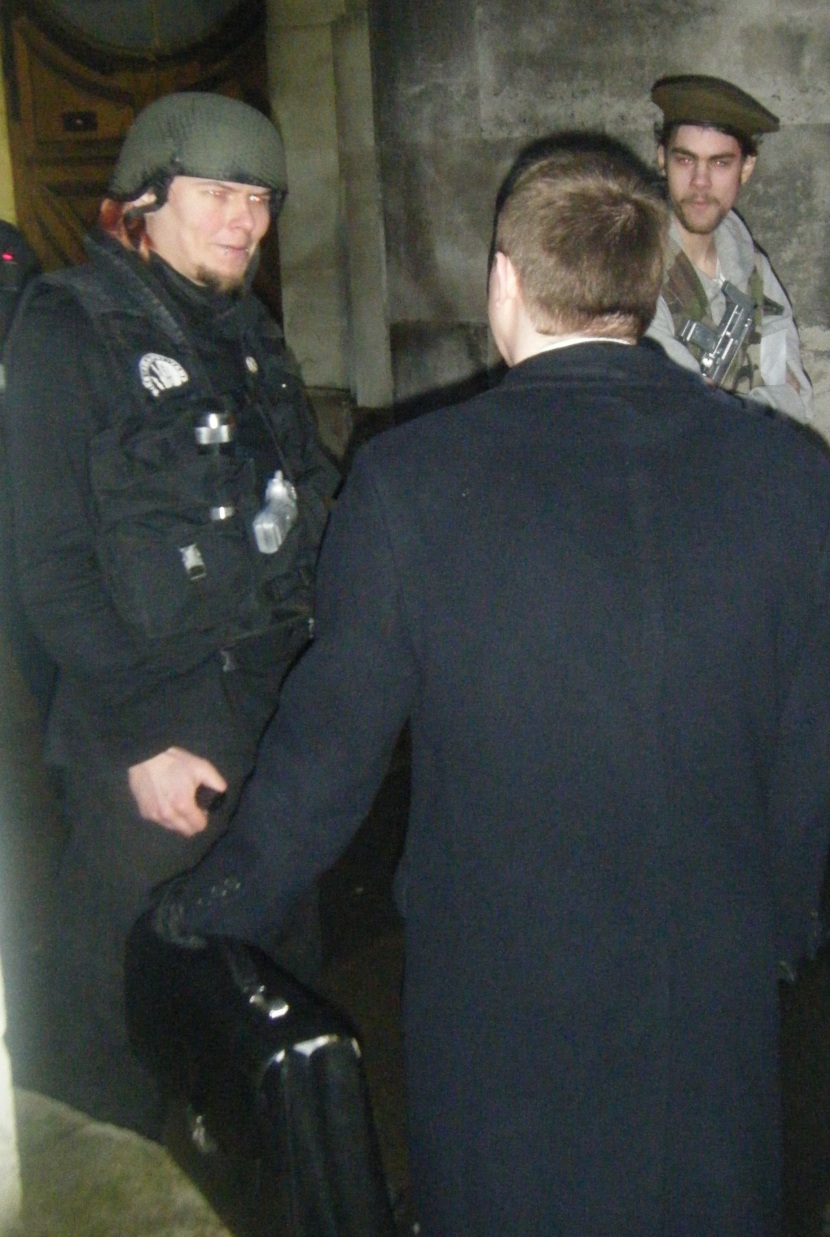 Initially when the Police arrived they asked the the guards to hand over their plastic water pistols. As you can see in the following photograph one cop created a cordon around the area and managed a cheeky smile for our camera while another brave PC took his life into his own hands in the course of duty to check the guns were not real. This photographic evidence seems to show this technique involves peering down the barrel of the possible deadly weapon to see if there are any bullets in there. 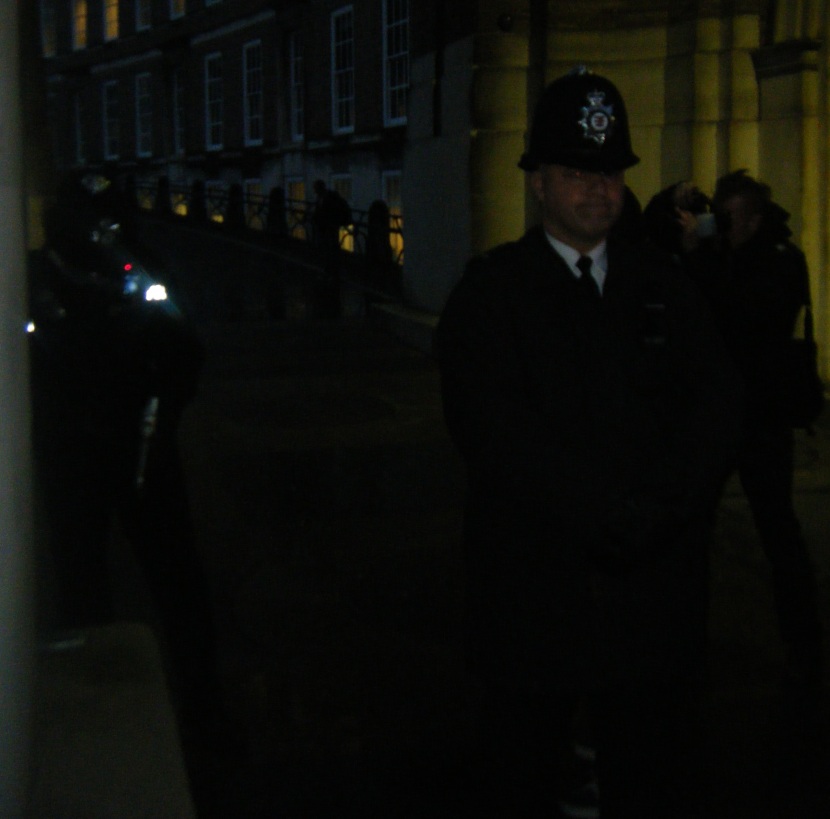 Once the Police were happy that the guns were unlikely to cause loss of life or even make anyone wetter than they already were in the poor weather they chose to reinforce the checkpoint and even took on the roll altogether when the guards went off to interrogate some pesky Palestinians. 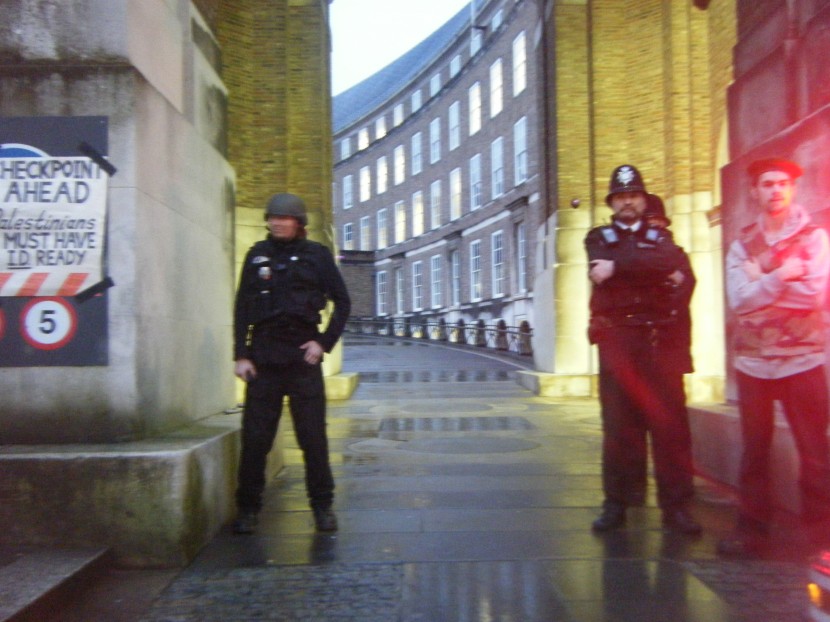 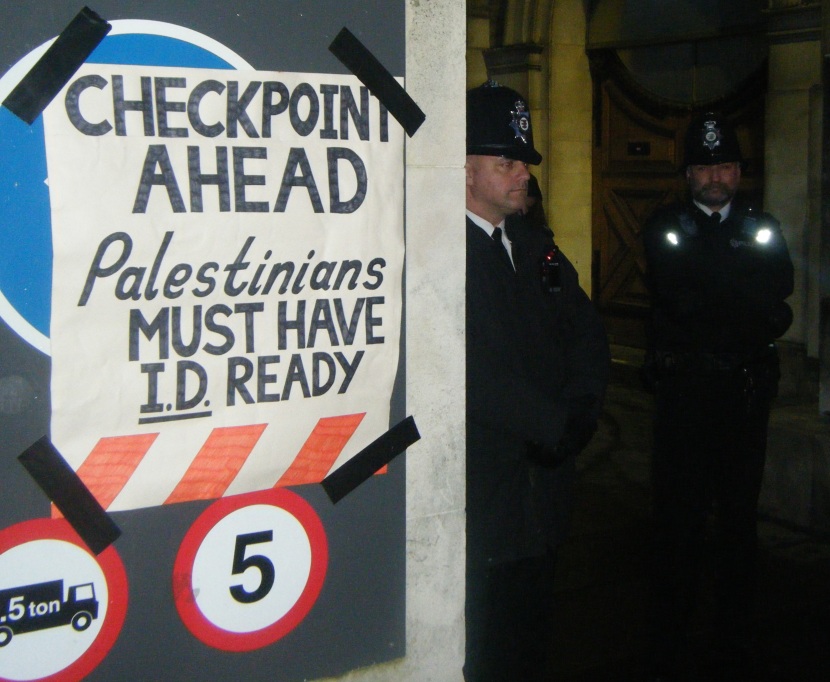 With the authority of the Police on their side our pretend border guards were able to fool even more delegates and guests into stopping at the check point. 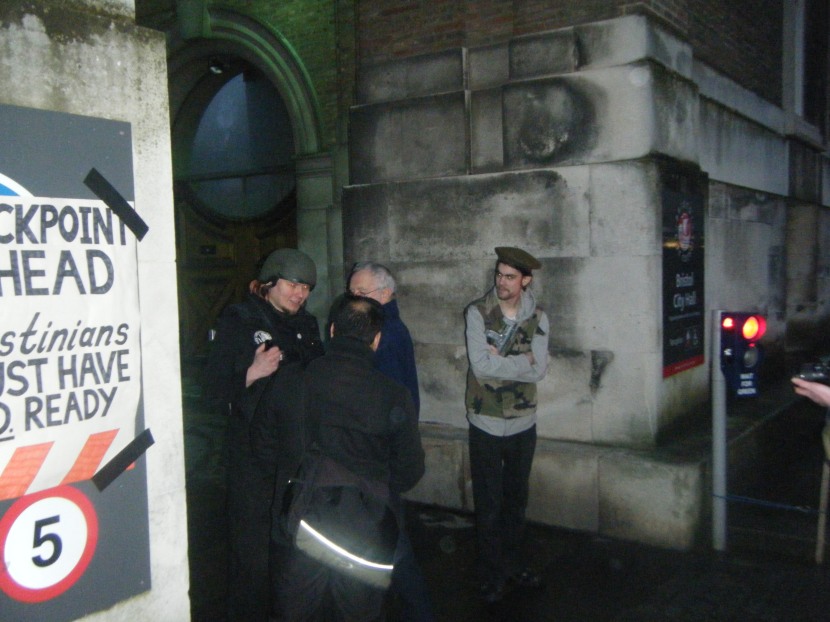 From the Bristol Against The Arms Trade blog:

Sir Roger Bone, ex-senior diplomat for the British Government and now advocate for global arms dealer Boeing UK is the key speaker at an executive event at the Bristol Council House. Sponsored by U.W.E. and another blood stained bank HSBC.

The Boeing empire had revenues from military sales of 30,700 million dollars in 2011  nearly 50% of its total sales, which moved it up to the second largest military company  in the world.   BAE Systems are 3rd.

The British Army has 67 Boeing Apache helicopters.  It was an Apache helicopter that was involved in the infamous collateral murder tapes, that  Wikileaks  released, showing  disturbing evidence of the murder of civilians in Iraq.

According to the most recent National Audit Office review of defense procurement, the MOD plans to buy 14 more Boeing Chinook helicopter and upgrade the cockpit of the existing. costing £1.2 billion.  We haven’t found accurate up to date overall figures but in 2009/10 Boeing was 13th largest supplier to the MOD with £251 million sales. Source FOI request.

See BAAT companies page for more details and Boeing Annual Report. In the US Boeing  agreed in Feb 2013 to become the US sales outlet for Elbit from Israel  to sell its UAV (drones).