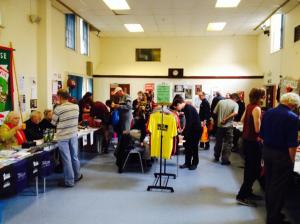 The Radical Bookfair was organised by Swindon Trades Council

We may have been exaggerating a little with the title, but yesterday was a step in the right direction. Members of Bristol AFed visited our groups most popular destination (yes, it really is) to take part in the first ever Swindon Radical Bookfair. It was a great opportunity for radicals from the town and the wider region to meet up and share information and a chance for other Swindon locals to get involved and find out about their cities radical past, present and (fingers crossed) future.

There were 19 stalls from various groups and trade unions, with AK Press, Kebele Info Shop, Wessex Solidarity, and our three favourite national organisations (AFed, SolFed and IWW) giving the fair a nice anarchist presence!  Throughout the day there were some excellent talks, my personal favourite being Nigel Costley’s one on the rebellious history of west country. Someone suggested we take the opportunity to show our solidarity with Pavlos Fyssas, and quite a few folks took them up on the idea, hastilly making some placards and gathering for a photo.  Pavlos Fyssas was a Greek hiphop artist and AntiFascist who was murdered this week by neo-nazis from the Golden Dawn Party.

After the bookfair was packed up there was a chance to unwind over a pint listening to some acoustic tunes at the official after party. As one of Swindon Anarchists put it ‘Great bookfair, beat the City bastards and off to the pub. Doesn’t get much better!’, luckily the only football fan amongst our contingent was a gas head so we had no reason to disagree!*. If you’re from the area and feel like getting involved in radical politics, then you can get in touch with Swindon Anarchists, Swindon Feminist Network, or Swindon Freeshop.

It was inspiring to see an event such as this happen in a small town (and one not known for its radical presence), and we’ve heard planning for next years event is already underway, nice one Swindonians!

*Bristol AFed considers itself team-neutral and we’ve managed to avoid arguments, even after the derby!