People may be aware of the allegations of a cover-up of sexual assault and rape within the Central Committee of the Socialist Workers Party (SWP), and the subsequent repression of SWP members who questioned it. Anarchist Federation members and other comrades in Manchester and Glasgow were man-handled & attacked when they confronted SWP leaders over their rape apologism. The SWP has not spoken out against these assaults carried out by its supporters. 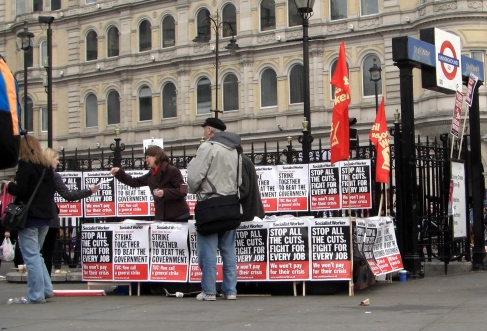 Bristol Anarchist Federation has always had strong political, theoretical and tactical disagreements with the Socialist Workers Party, however we have sometimes worked alongside them on broader campaigns. For example we joined a coalition with them and other groups under the “We Are Bristol” bann,er to organise against the English Defence League march last year.

Since then, with these allegations, it has become very clear we cannot tolerate an SWP presence on any similar campaigns again. A large number of SWP members, particularly younger members in Bristol, have left the organisation. On a national level, after it became clear the organisation and its leadership would not change, hundreds of members and some entire student branches have left. As such those who remain offer at the very least tacit support for the views and actions of the Central committee.

Recently what remains of the SWP in Bristol were blocked from entering Bristol University’s Freshers Fair where they had a stall booked via their student wing (SWSS). They refused to provide the Students’ Union with a statement regarding their position on the views, actions and rape apologism of their (national) central committee. We support the work of Bristol Left and Bristol FemSoc members who first raised this issue with the Students’ Union.

Bristol SWSS and Bristol SWP branch’s unwillingness to condemn this makes them complicit in rape, rape apologism and patriarchal power dynamics and as such we will not organise with them or work along side them in future.

Although we agreed this in private months ago, we recently heard the EDL are coming back to the city, so we are taking this opportunity to make public our condemnation of the Bristol branch of the SWP and their national counterparts in their unwillingness to condemn the sexism, rape apologism and patriarchal power structures which exist within the organisation. The SWP have taken no steps to deal with this situation and in fact have only shored up these behaviours with their attempts to cover up, persecute dissenting voices from within their organisation, and victim blame.

Further to this the SWP are barred from events, demos, public meetings and all other activities we solely organise. We believe that the presence of people who support the SWP’s central committee, their banners, placards and propaganda, contravenes our safer spaces policy. For these reasons they are not welcome and would be asked to leave. Individual SWP members (not including paid employees of the SWP) who do not support the actions of their Central Committee are still welcome to attend (without SWP propaganda), however we would question why such an individual would still be in the party. Finally we will propose barring the SWP from all future events we are jointly involved in organising.

Update: New developments as the SWP sink further after their conference (shedding yet more key members) and face more opposition around the country.