We recommend reading the following two articles, although its not required! Anyone looking to fight the cuts or learn more is welcome, whether or not you consider yourself an Anarchist.

Poking a Future Monarch with a Stick
A critical analysis of the anti-cuts movements against the ConDem coalition written by a Bristol AFed member.

Or, how to have a stress free polling day AND change the world.

Step 1:
Get your polling card and all the party political propaganda that has been given to you. 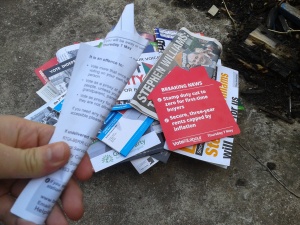 Step 2:
And a lighter 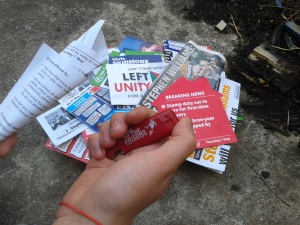 END_OF_DOCUMENT_TOKEN_TO_BE_REPLACED

In December the claws of the Spanish state came out, dropping all pretence of presiding over a fair & free society they launched an attack on everyone resisting capitalism & fighting for the working class, specifically targeting organised anarchists as the biggest threat to the power of the elites.
END_OF_DOCUMENT_TOKEN_TO_BE_REPLACED

Rather briefly! It’s the first TV news interview Bristol AFed has agreed to, perhaps we felt more optimistic about the chances of some good coverage after a relatively successful summer interview with BBC Radio Bristol.  You can watch the segment that was broadcast today here, and a longer version of the interview on Channel 4’s website. Sadly we didn’t get as much on air time as DCI Andy Bevan, who they emotively interviewed at the site of a recent incident of arson.

The footage was taken from a much longer interview (about three quarters of an hour – not that we expected it would get shown in full!).  We’re glad they kept in part of our definition of anarchism but perhaps the world would have been a better place if channel 4’s viewers weren’t subjected to our awful singing at a recent anti-workfare protest.

Predictably the rest of the segment, focuses on a series of acts of criminal damage carried out in the West Country over the past few years, including the destruction of a multi-million pound police fire arms training centre. Sadly there wasn’t much focus on the political policing and harassment of activists that followed, or local anarchists resistance to it. The cops still seem obsessed with tracking down END_OF_DOCUMENT_TOKEN_TO_BE_REPLACED

How to survive the cold nights, dark days, and endless parade of twee consumerism of December?  Well, this list of inspiring actions and events might help keep your spirits warm.

END_OF_DOCUMENT_TOKEN_TO_BE_REPLACED

As well as our usual stall, where we will have copies of the latest issue of Organise! along with a selection of our pamphlets and other propaganda (hopefully including the new edition of Role of the Revolutionary Organisation hot off the press!), we will be involved in two workshops throughout the day. 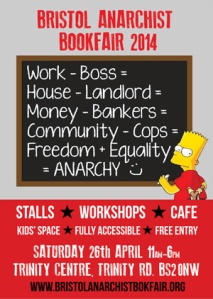 The first workshop starting at 12:30PM in the Bookfair Assembly Room on the first floor is called: “Is Bart Simpson an Anarchist?” and hopes to answer some important questions raised by this year’s poster design:

We felt some of Bart Simpson’s calculations on this year’s bookfair poster were at best debatable and at worst problematic. Does Work minus Bosses, or Money minus Bankers really equal anarchy? What do we mean by the term “Work” anyway? And can money really have a role in an Anarchist society?

We’ll also be taking part in the “Solidarity in Bristol” workshop directly after that at 2:00PM with Bristol Solidarity Network, Acorn Bristol, IWW, Bristol SolFed, and Bristol Refugee Rights:

Solidarity is a central idea which we organise round but how does it work in practice – especially across social and political differences? People actively showing solidarity with workers, migrants, claimants, and local and international struggles discuss what has been productive and challenging in their solidarity work.

Members of Bristol Anarchist Federation will be stationed at our stall throughout the day so if you have any questions or just want a chat come and say Hello!

Don’t forget the Bookfair Afterparty this year taking place at The Red Lion in St. George. Confirmed acts so far include Hazel Winter, Public Order Act, MC Amalgam, QELD and Ash Victim. The festivities start at 8:00PM and all proceeds go towards the Bristol Anarchist Bookfair Collective to help them do the same thing again next year!

We hope to see you all there!

When members of the “Angry Foxes Cell” burnt down the almost complete Police Firearms Training Centre in Portishead near Bristol, it took a lot of people by surprise, ourselves included. This week the Bristol Post published an article on a report by Avon & Somerset Police with the Stalinesque title “Our Five Year Ambition”. The Posts front page ran the Headline “Targeting the Enemy Within.” This was followed up by a comment from the editor singling out anarchists and drumming up public support for their increased oppression.
END_OF_DOCUMENT_TOKEN_TO_BE_REPLACED

The June issue of Resistance (Anarchist Paper) is out now, we even have printed copies ready to hand out on the first of the month – and people tell us anarchists aren’t organised!

Includes updates on the struggle against the exploitation of Bangladeshi workers, Wildcat strikes in Brighton, Anti-Blacklist campaigners in Manchester and more.

If you can’t wait to get your hands on a printed copy (free/donation) you can download the PDF here. We’ll also be handing some out at tomorrows Anti Bedroom Tax demo at 1pm on College Green.

If thats not enough news about working class resistance for ya, then take a look at the Bristolian. 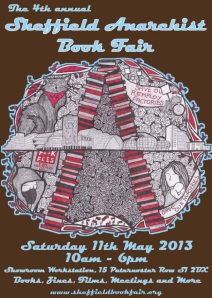 The 4th annual Sheffield Anarchist Bookfair took place last Saturday 11th May at the Showroom Workstation. A member of Bristol AFed went to the Bookfair as part of the Kebele Social Centre/Infoshop Collective. This is their personal account of the day:

After a slow start to the day – waking up at 4am and being stuck on the side of the motorway until 9am – we finally arrived at the Sheffield Anarchist Bookfair at around midday. We set up our stall next to Bristol Against Arms Trade (BAAT) and were happy to find ourselves nestled between comrades from Collective Action and The Commune with The Cowley Club Social Centre (from Brighton) and Sheffield IWW opposite us.

Once we’d finished setting up I took some time to look around the other stalls. There were at least 28 stalls at this year’s Anarchist Bookfair. Despite this the Bookfair gave off the impression of a bustling and active movement with lots of people walking between stalls and talking to eachother. This really felt like a local Bookfair and I loved it.

END_OF_DOCUMENT_TOKEN_TO_BE_REPLACED 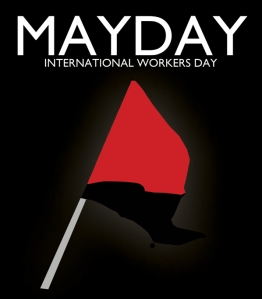 MAY DAY – May 1st – has been celebrated as International Worker’s Day since 1890. The date was chosen by members of the Second International to commemorate the Haymarket Affair which occurred in Chicago, United States in 1886: On May 1st 1886 American unions held a nationwide general strike. An estimated 400,000 workers went on strike in Chicago. In the days following the strike, seven anarchists were framed and sentenced to death after a bomb was thrown at the police during a rally called on May 4th in response to an act of police violence following the strike outside the McCormick Harvesting Machine Company on May 3rd that left six workers dead.

For a full history of the Haymarket Affair, the Haymarket Martyrs and the origins of May Day please watch this talk by Bristol Radical History Group from 2012 at Hydra Books.

Across the world yesterday workers took to the streets to celebrate International Worker’s Day (1st May)! We have complied below a incomplete list of actions from around the globe. With this list we hope to showcase the sheer size and diversity of the modern worker’s movements: