The following is a repost of an open letter we have signed, the original is hosted here.

If you would like to add your name to this open letter – please fill in this google form.

We, the undersigned, strongly condemn Bristol Pride’s acceptance of sponsorship money from Airbus for this year’s Pride, and demand that they ditch Airbus as a sponsor.

We want an apology from Bristol Pride, a commitment to never again accept money from those who profit from war crimes, and for them to understand that our community does not exist to be used to pink-wash the arming of oppressive regimes.

Solidarity is an action not empty words. For Bristol Pride to claim “we are with” LGBTQ+ activists in Istanbul, who bravely marched despite the ban on Pride, while accepting blood money from a company who supply Turkey’s military is gross hypocrisy. Last week LGBTQ+ activists marching at the banned Istanbul Pride were met with tear gas, rubber bullets, arrests and brutalisation; and the AKP government, led by Erdoğan, is deeply homophobic. [1]

Aircraft that Airbus supply to the Turkish military include the CN235 Maritime Patrol Craft, and the A400M multi-role transport aircraft. [2] The latter has its wings assembled in Filton, Bristol. [3]

Turkey has been invading Afrin, a predominantly Kurdish region in North Syria/Rojava, since January this year. There is strong evidence that Turkey has been employing former ISIS and al-Qaeda fighters for the invasion and occupation. In an interview with The Independent, a former ISIS fighter revealed that “most of those who are fighting in Afrin against the YPG [People’s Protection Units] are Isis, though Turkey has trained them to change their assault tactics.” [4] 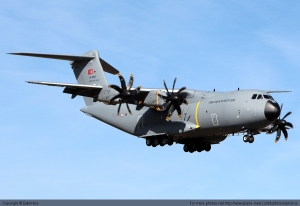 Made in Bristol! Turkish Military Transport

In a recent statement, the Rojava Democratic Autonomous Administration Women’s Coordination condemned the abuses of the invading Turkish armed forces and their mercenary allies, saying:
“Erdogan and his mercenaries have occupied Afrin and forced people to leave their homes while at the same time changing the demography of the region. Turkey is also settling mercenaries and their families into the homes of the residents of Afrin”.
“The atrocities against the people of Afrin carried out by the Turkish army and their mercenaries are happening every day under the silence of the international community: women abduction, rape, forcing Ezîdîs to become Muslim, plunder.” [5]

The acceptance of sponsorship money from Airbus is also a specific attack on the Bristol queer community. Anna Campbell, a Bristol-based lesbian, was killed in Afrin, north Syria/Rojava, by a Turkish air strike in March. After going to Rojava to learn from, and support, the women’s revolution; and to fight against ISIS with the YPJ (Women’s Protection Units), she went to Afrin to help defend it against the invasion by Turkey. She was killed with two YPJ comrades, Sara Mêrdîn and Serhildan, while protecting civilians who were evacuating Afrin.

Airbus, along with BAE and Leonardo, also build the Eurofighter jet which they supply to Saudi Arabia, [6] who have used it extensively in their bombing campaign against Yemen. [7] Currently one child dies every ten minutes in Yemen. [8] Saudi Arabia has one of the worst LGBT rights records in the world, with homosexuality criminalised. Being gay or trans in Saudi Arabia means risking fines, imprisonment, torture and even the death penalty. [9]

We call on Bristol Pride to have some integrity and ditch Airbus now!

More about our views on Pride:

Battle for the Soul of Pride

Ps.
Don’t think we haven’t noticed you, Babcock, just because you’re a smaller arms company with a smaller sponsorship deal. So small you kind of have to squint to read your name on the promotional material.

Kurdish resistance fighters, including many who speak of their commitment to an anarchist inspired social revolution, continue to battle repressive Daesh (ISIS/IS) forces around Kobanê. The optimistic would imagine that the role of the neighbouring Turkish state (a member of the US led coalition against Daesh) would involve opening its nearby border to feeling civilians, aiding those refugees who have already crossed, providing humanitarian assistance to the besieged town, or even actively supporting the resistance.  The reality could not be more different.

Turkish state forces have attempted to seal off the border to both those fleeing out of Kobanê and those attempting to bring aid and supplies in to the town (suspiciously those arming Daesh forces have been slipping through relatively un-harrassed), The Turkish army have also attacked Kurdish refugees END_OF_DOCUMENT_TOKEN_TO_BE_REPLACED