People may be aware of the allegations of a cover-up of sexual assault and rape within the Central Committee of the Socialist Workers Party (SWP), and the subsequent repression of SWP members who questioned it. Anarchist Federation members and other comrades in Manchester and Glasgow were man-handled & attacked when they confronted SWP leaders over their rape apologism. The SWP has not spoken out against these assaults carried out by its supporters.

Bristol Anarchist Federation has always had strong political, theoretical and tactical disagreements with the Socialist Workers Party, however we have sometimes worked alongside them on broader campaigns. END_OF_DOCUMENT_TOKEN_TO_BE_REPLACED 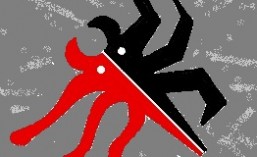 A really interesting read via ‘Spread the Infestation’ : why socialists should care about anarchism.

There is also for balance, a ‘why anarchists should care about bolshevism’ article on the same blog. Although as part of the class struggle anarchist current (which has always been the most prominent, especially outside of america), we would refute some of the points it makes. Anarchists do have a revolutionary strategy, and do believe some ideas are better than others. END_OF_DOCUMENT_TOKEN_TO_BE_REPLACED

Over the last year or so Bristol has seen trade unions, left wing organisations and radical/revolutionary groups working together in a way that has not been seen in the city for a long time.

As the anti cuts movement began to build early signs of this came from the UK UNCUT movement. In Bristol, although the initial protests were organised by Bristol Anarchist Federation members we made a conscious choice, at least at first, to keep the “A” word out of sight.
There were a number of reasons for this, and just as many criticisms of it, but essentially we wanted to push a united anti-cuts message without sectarian politics clouding the end goal – To stop the cuts.
On the whole other groups respected and reciprocated this approach, although not always (see here under Bristol). Unfortunately our e-mail request for the SWP to edit this article claiming they had fronted the UK UNCUT action in Bristol when it was actually Students and AFed was ignored. Original write up on demo here. END_OF_DOCUMENT_TOKEN_TO_BE_REPLACED

This is a re-post of an article by Steven Johns on libcom.org an Anarchist Federation member. We were going to write our own response to the original article available here, but decided this was better than we would have put things.

It is an open letter to Socialist Worker newspaper in response to “Autonomism and the fight for change” by Estelle Cooch.
END_OF_DOCUMENT_TOKEN_TO_BE_REPLACED

Quite late I know, never mind.

On Sunday October 3rd Bristol Anarchist Federation and comrades headed up on the “Right to work” coach along with some Class War, SWP and union activists to attend the demo against the Coalition cuts at the Conservative party conference.

Our coach arrived at the drop off point but on the other side of the road to the other coaches. Rather than just letting us off our “Steward” informed us we hadn’t followed the map properly so we drove off in an attempt to get there as the directions stated. We promptly got even more lost at which point we persuaded the driver to stop so we could walk there.

When we arrived we did as the toffs out website suggested (http://www.nocpc.info) and looked out for the red and black flags. It didn’t take us long to notice that the only red and black flags there were ours and we soon begun acting as a magnet for the anarchos and militant workers spread around the meeting point totalling about 40-50 people including comrades from Sheffield AFed and other individuals and affinity groups.

As the bloc gathered and warmed up with heckles of the Swupies rally speeches one of us heard that the RTW steward were collaborating with the police and planned to prevent us leaving with the main march. (Later we heard one SWP steward threatened to get some of the bloc arrested – http://www.indymedia.org.uk/en/2010/10/464168.html?c=on#c256884).
After a quick discussion we decided to split into small groups until we were moving. This may have helped us get out and on the move but it took a good 15-20 minutes to form up and be joined by more class war and IWW members who had been “laying low” in a local pub.

The cops played their cards pretty well most of the time, light touch policing most of the way, much of the bloc seemed pretty surprised upon reaching the possible access points to find 12 foot high solid metal gates blocking the way.

Despite all the talk of the long list of targets to hit (“screw you pizza express”) on the Toffs Out website the small black block (about a hundred in the largest group) flanked by members of “Revolution” were kept to Birmingham’s back streets along with the main march, the cops keeping an eye out for any opportunity to kettle us.

After a strange BlackBloc/Police photo op at the final steel wall near the Tories convention centre we were on the home straight and moving away from the ICC. On a side street next to a cinema there were a large number of dog handlers and police vans which attracted the attention of the anarchists splitting the march in two.

At this point West Midlands police pulled of a relatively impressive set piece. A line of cops had been blocking a slip road next to the cinema so the march would move along a road to the right. When the bloc moved towards the cinema the police line on the slip road moved to the right side with more coming from behind. Some managed to sidestep the forming lines but the rest were left without warning and with little support to run up the slip road to try and avoid the kettle. 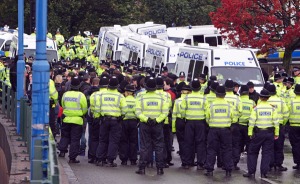 A few reviews of this potion of the day come from proud activists who avoided the kettle and say we brought it on ourselves. In reality, we were taken by surprise (and got a little lost). If half the group hadn’t scarpered and mixed in with the main march there would have easily been enough people to break the kettle which in its early stages only consisted of about 30 cops and we all could have got out.

The section of the march behind us stopped and some chanted “solidarity” before fucking off so as not to miss the start of the closing rally. Others though, and Kudos to them stayed for a long time and only moved once we had been moved out of sight and they had been forced down the road. Some attempted to get back to us but were prevented by the ever building police presence.

People resigned themselves to being in the kettle too easily with a couple of opportunities to get out had we worked as a unit. After a while the cops shuffled us up the ramp and over the roundabout where we were greeted with a sea of florescent jackets and police vans. As you can see from the pictures there were well over 60 cops surrounding us now along with eight vans, motor bikes and five or six dog handlers. We has been held long enough for the police to get a section 60 in place and one at a time we were let our of the primary kettle to be searched and out photos taken only to find ourselves in a larger secondary kettle made up of around 40 police where we were kept until everyone had been processed. So in total west Mids police had sent around 120 cops, 5 dogs, 8 vans plus bikes and cars to hold 30 – 40 activists who were moving AWAY from their target for just over two hours. The only thing it did was give us an excuse not to put up with yet another RTW/SWP rally. Thanks Bastards!