The Radical Bookfair was organised by Swindon Trades Council

We may have been exaggerating a little with the title, but yesterday was a step in the right direction. Members of Bristol AFed visited our groups most popular destination (yes, it really is) to take part in the first ever Swindon Radical Bookfair. It was a great opportunity for radicals from the town and the wider region to meet up and share information and a chance for other Swindon locals to get involved and find out about their cities radical past, present and (fingers crossed) future.

END_OF_DOCUMENT_TOKEN_TO_BE_REPLACED

This year Bristol Trades Council is pulling out all the stops and attempting to throw their biggest May Day March in years.  Whilst they may not have said it themselves, we’d like to think the effort of everyone who got involved with the 1st of May Group last year and the success of our demos, actions, and saturday march is what inspired them! END_OF_DOCUMENT_TOKEN_TO_BE_REPLACED

K: “Guess what? The south west TUC are actually organising a big event for Mayday this year.”

K: “I bet you can’t guess exactly what that are going to do?”

B: “Oh a challenge huh? Well, they will not do it on May day, it will be on the following Saturday. There will be an A to B march from City Hall at …11.00 am?! It will finish in Castle Park for a Rally at the band stand.”

K: “Ha, yes, exactly that! Also I’ve managed to find out where the next organising meeting for the march is. They’ve invited a few groups along, maybe our invite got lost in the post, lucky we found out about it huh?”

So we decided to pop along to the meeting to see if we could have some say on the plans for May Day. Last year we were involved in a group organising (and encouraging others to organise) a week of action based around Mayday including a march and rally hosted by BADACA. We thought we would see how plans were panning out for this years May Day celebrations, expecting a large public meeting (last year had 30+ people at the ‘first of may group’ meetings) we instead found ourselves in some sort of steering committee, END_OF_DOCUMENT_TOKEN_TO_BE_REPLACED

On Saturday 26th March Bristol Anarchist Federation attended the “March for the Alternative” called by the TUC. We joined the Militant workers bloc on the South London Feeder March. We marched along side South and North London Solidarity Federation, other Anarchist Federation Branches, Lambeth & Lewisham Save our Services, Coalition of Resistance, Latin American Coalition against the cuts and many more groups and individuals. Just this one feeder march had over 5000 demonstrators (Met’s figure). With Anarchist groups on at least three of the feeder marches, the main march, and at least two separate black blocs we believe this was the biggest Anarchist turnout in the UK since the G20. 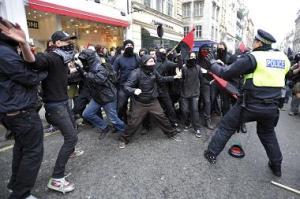