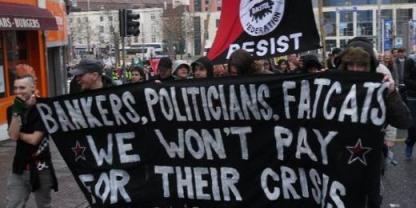 Intro
Bristol Anarchist Federation (AFed) are an active group of class struggle Anarchists. We are working in shops, we are working in offices, we are unemployed, we are students.  We fight for a world without leaders, where power is shared equally amongst communities, and people are free to reach their full potential.  We do this by supporting resistance against the worst excesses of the state and big business, organising actions and demonstrations, hosting informative events and producing propaganda. You can read more about what we believe and what we do above.

History
Bristol AFed came together when a small group of anarchists, activists and cynical ne’er-do-wells met during the Bristol Co-Mutiny in 2009. We formed in the hope of filling the need for a national class struggle and solidarity group in Bristol which was  able to turn its hand to whatever was needed.

Since then we’ve been actively involved in local campaigns against spending cuts,  helped occupy two universities, demonstrated against companies who exploit people with disabilities, closed Vodafone more times than we can remember, joined about a dozen picket lines, got 200 Santa’s to run through Cabot Circus, started our own sports club,  and organised a benefit gig or three.

National & International Connections
Bristol AFed is part of the UK Anarchist Federation. The Anarchist Federation is a growing organisation of anarchist communists in England, Wales and Scotland which formed in 1986.  It is made up of individual members and local groups who are politically active in many workplace and community struggles.

The UK Anarchist Federation is affiliated to the International of Anarchist Federations, which has member federations in thirteen countries and connections with anarchist groups in many more. In 2012 some of us from Bristol went to the St Imier International Gathering in Switzerland, and met up with thousands of anarchists representing groups and networks from around the world.