As part of the regular prisoner letter writing evenings on Thursday 7th March Bristol Anarchist Black Cross will be hosting the Bristol leg of a speaking tour organised by ABC and The Anarchist Federation by a comrade from Belarus ABC. They will be talking about the present state repression and the anarchists currently held in Belarussian prisons, plus the solidarity work needed to support them.

We will also be serving delicious Belarussian food so make sure you don’t miss out! We invite you to join us for food from 6:30PM at Kebele (14 Robertson Road, Easton, BS56JY) to write letters to imprisoned comrades, eat some tasty food and listen to this inspiring talk!

This is a fund raising event, all surplus from food sales and donations given go towards the solidarity campaign.

THE STORY SO FAR – From Bristol Anarchist Federation Blog

Belarusian anti-authoritarian activists; Ihar Alinevich, Mikalai Dziadok, Artsiom Prakapenka, Pavel Syramolatau, Aliaksandr Frantskievich, Jauhen Vas’kovich were sentenced to 3 to 8 years in prison for a series of attacks on state and capital symbols, and are finishing their second year inside. In October 2011 they were acknowledged as ‘political prisoners’ by rights-watch organisations. This improved their chances to be freed, as the President of Belarus, Alexander Lukashenko, faces pressure from the European Union to free all political prisoners. He has already pardoned more than 30 of them, but none of our anarchist comrades were granted freedom.

There are currently 15 people listed as ‘political prisoners’ in Belarus, Lukashenko has stated that he will freeonly those who write a petition for pardon, admitting their guilt and asking him personally for mercy. Five of the inprisoned activists have refused to sign, whilst Artsiom Prakapenka signed it under pressure but remains in prison. All the remaining ‘political prisoners’ are under pressure from the prison authorities to sign the petitions. Methods to attempt to force them to do soinclude; transfers to other penal institutions, preventing food supplies coming in, preventing and limiting visits from relatives, denying phone calls, delays and gaps in the receipt of letters, solitary confinement, transfer to a penal facility with a ‘special regime’, etc.

The anarchists federations that met together at the IAF Congress in St. Imier, Switzerland strongly oppose the fact that our comrades are now being traded for benefits from the EU and condemn the pressure that they have been experiencing. We call on everybody to protest against these tortures and demand the immediate liberation of all political prisoners of Belarus, including anarchists and democracy campaigners. (includes excerts from statement by the International of Anarchist Federations). 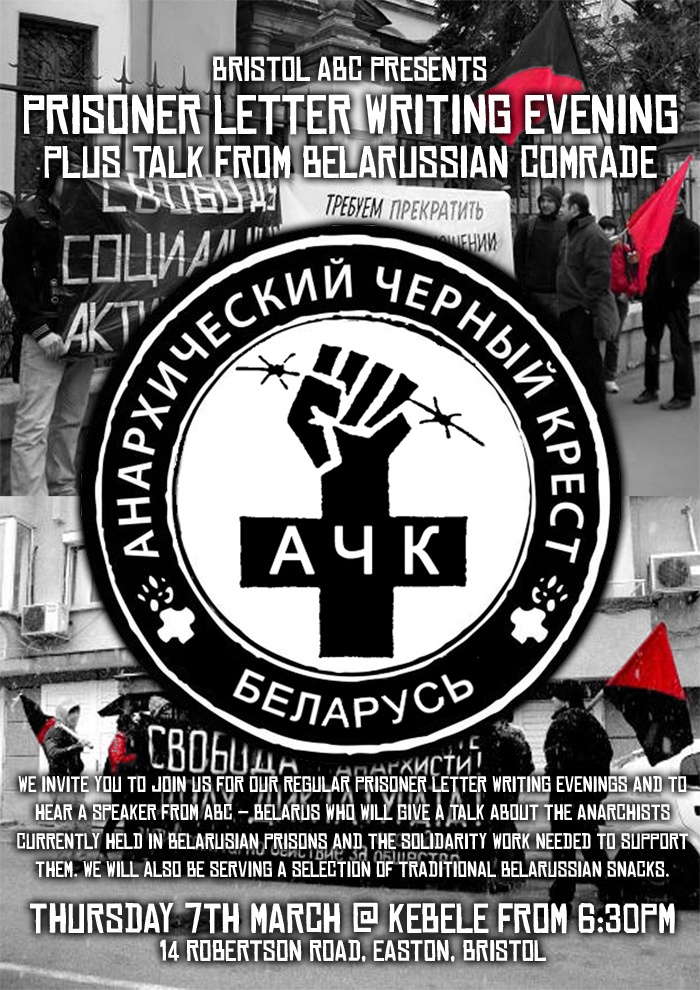