Rather briefly! It’s the first TV news interview Bristol AFed has agreed to, perhaps we felt more optimistic about the chances of some good coverage after a relatively successful summer interview with BBC Radio Bristol.  You can watch the segment that was broadcast today here, and a longer version of the interview on Channel 4’s website. Sadly we didn’t get as much on air time as DCI Andy Bevan, who they emotively interviewed at the site of a recent incident of arson.

The footage was taken from a much longer interview (about three quarters of an hour – not that we expected it would get shown in full!).  We’re glad they kept in part of our definition of anarchism but perhaps the world would have been a better place if channel 4’s viewers weren’t subjected to our awful singing at a recent anti-workfare protest.

Predictably the rest of the segment, focuses on a series of acts of criminal damage carried out in the West Country over the past few years, including the destruction of a multi-million pound police fire arms training centre. Sadly there wasn’t much focus on the political policing and harassment of activists that followed, or local anarchists resistance to it. The cops still seem obsessed with tracking down END_OF_DOCUMENT_TOKEN_TO_BE_REPLACED

When members of the “Angry Foxes Cell” burnt down the almost complete Police Firearms Training Centre in Portishead near Bristol, it took a lot of people by surprise, ourselves included. This week the Bristol Post published an article on a report by Avon & Somerset Police with the Stalinesque title “Our Five Year Ambition”. The Posts front page ran the Headline “Targeting the Enemy Within.” This was followed up by a comment from the editor singling out anarchists and drumming up public support for their increased oppression.
END_OF_DOCUMENT_TOKEN_TO_BE_REPLACED

Nearly a million workers will be striking and demonstrating on June 30th- workers in education, the civil service and the London underground. This is a further sign of widespread anger within the working class at the package of austerity measures unleashed by the government. We have already had the student demonstration which ended with the Millbank occupation, the huge turnout on March 26th as well as many local actions including strikes, blockades, marches. 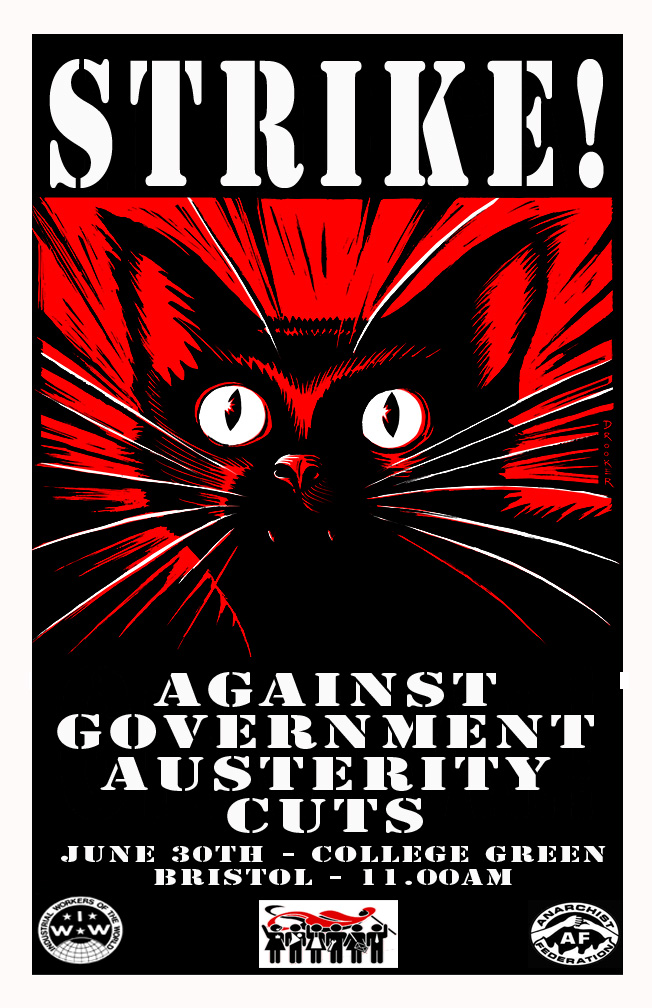 END_OF_DOCUMENT_TOKEN_TO_BE_REPLACED

Don’t miss out on all the fun down at Bristol Anarchist Bookfair on Saturday, it’s gonna be a riot! (not literally of course – Ed)

The event takes place in Hamilton house on the now infamous Stokes Croft. With three floors, 60 stalls and a workshop shedule to put London Bookfair to shame, reading up is the new kicking off in Bristol This Saturday.

END_OF_DOCUMENT_TOKEN_TO_BE_REPLACED

First issue of our new news sheet. Feel free to copy and distribute

Around 10pm on Thursday 21st April, people from Stokes Croft and St Pauls in Bristol, reacting to blatant provocation, started attacking riot police gathered from three different forces with glass bottles. What ensued was seven hours of constant clashes; police charges, volleys of glass, brick and concrete, burning barricades and the trashing of a much-loathed Tesco recently forced on a community who for so long battled to stop it opening.

Just before 9pm, police had forcibly removed a small protest from outside the Tesco, which had been there since the store opened a week earlier and set up a cordon closing that stretch of the road. Their stated aim was to enter the squatted ‘Telepathic Heights’, an iconic, graffiti covered building opposite Tesco. They claimed to be acting on intelligence that suggested some occupants where planning to make petrol bombs with which to attack Tesco. Even if this intelligence was accurate, the numbers of police was far disproportionate to the half a dozen occupants of the squat.

The blocking of road by the police and the news that Telepathic Heights was threatened and that the Tesco protest had been forcibly broken up meant it wasn’t long before a substantial crowd had gathered. The crowd became more and more angry as police refused to give justification for their presence, pushing or hitting anyone who got close to their lines. The increased tension of recent months, which has built up as austerity measures begin to kick in and the community of Stokes Croft and St Pauls feel ever more ignored and marginalised, had found a focal point and personification in the belligerence of the police. All it took was for someone to tip over a glass recycling bin.
END_OF_DOCUMENT_TOKEN_TO_BE_REPLACED