On Tuesday Bristol Anarchist Federation hosted a talk by Peter Gelderloos on the theories in his latest book Worshiping Power: An Anarchist View of Early State Formation.  We packed out Kebele with people eager to hear about it, we certainly weren’t disappointed. Our friends over in Bath also hosted a talk the following day after we got in touch with them, spreading a bit more anarchy to our gentile neighbour.

It is always refreshing to hear history unchained from the often stagnant ideas of mainstream society. However not only did the talk (and book) go into how states first arose, but how they continue to adapt to sustain the power they hold over us. The lessons contained are essential for all of us fighting for a better world – not just the anarchists. One that stuck out most is one of only two characteristics that all states shared upon forming, Patriarchy.  Male domination of both the family and the people that a state would subjugate was universal. It was also actively forced upon societies that were more gender-balanced by imperial powers such as Britain, Spain and France, all seeing it as essential to their control. This is one more nail in the coffin of those who would argue that feminism is any less essential to anarchism than the fight against the state and capitalism.

If you missed it, or if you want a recap, the event hosted by London Anarchist Federation at the Anti-University was recorded here. END_OF_DOCUMENT_TOKEN_TO_BE_REPLACED

Bath Anarchists at a Bedroom Tax demo outside the Guildhall, March 2013

Calling anyone in Bath who is an Anarchist, thinks they might be, or is just Anarcho-Curious. Join the Anarchist Federation and friends on Saturday the 8th of April  re-ignite anarchism in Bath! We’ll be having a freeshop in the centre, followed by a meeting to share schemes and ideas (Facebook event).

Bath, perhaps surprisingly for such an outwardly gentile city, has a solid history of anarchist organisation going at least back to 1925, END_OF_DOCUMENT_TOKEN_TO_BE_REPLACED

Austerity (or cuts as most of us think of it) is a hard pill to swallow. Services are closed or run into the ground with ‘efficiency savings’, jobs are lost, and benefits cut. Still, it’s a necessary cure right? Us ordinary folk can’t continue to have luxuries like care for the elderly. The state needs every penny to help pay off the national debt. You know, that one that got built up by bailing out the bankers. After all, those bankers need to maintain the bare necessities of life, like their multi-million pound salaries and private yachts.

Surely after six years it must be working? Well… END_OF_DOCUMENT_TOKEN_TO_BE_REPLACED

The big weekend! Homebase have been quiet since Wednesday, when they released a frankly lame statement about maybe suspending further commitment to workfare. They’re probably waiting to see what happens so lets make sure we get their attention.

If you can, get down to a protest, listed on facebook and indymedia (Bristol   Bath) or grab a friend, print some of the boycott workfare leaflets  and head to your local homebase to talk to staff/customers!

You can also drop them a fax for free using END_OF_DOCUMENT_TOKEN_TO_BE_REPLACED

Last Saturday over 50 people gatherd in Broadmead for an anti-Workfare demonstration called by ourselves and Bristol Solidarity Federation. Aswell as friends from Bath Anarchists (BARF), the IWW and the Socalist Party there were plenty of new faces we hadn’t seen on previous demos. 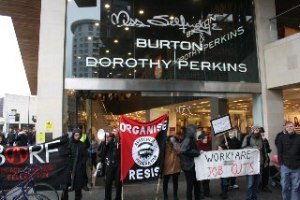 Before we had even set off our spirits were lifted by the news that Superdrug had already pulled out of workfare just before the demonstrations set to take place across the country, Result! The first stop on our tour of companies using forced labor under the workfare scheme was Dorothy Perkins in Cabot Circus. Its always good to reclaim spaces like Cabot that are technically no longer public but in the hands of private owners. The security were powerless to stop us due to our weight of numbers, and ability to resist their clever mind tricks such as saying ‘don’t you want to go that way instead?‘. END_OF_DOCUMENT_TOKEN_TO_BE_REPLACED

Boycott Workfare have called for a week of action against workfare – the infamous government scheme to force benefit claimants to work for free. It has been shown to be corrupt, expensive, illegal and immoral not to mention useless at finding people jobs. It does help line the pockets of the rich though!

Previous actions and public pressure have forced dozens of companies and charities to drop out of the scheme, and its about time those still in it were persuaded to rethink their position.

In Bristol there will be a Demonstration and rolling picket of workfare providers around broadmead on Saturday the 23rd meeting at 2pm at the Castle Park bandstand, everyone who opposes the scheme is welcome. See the facebook event.

Anyone who wants to get creative can join us for banner making, placard painting and last minute scheming on Thursday 21st in the Art Room at Kebele Social centre in Easton from 7pm! We have lots of paints and materials but bring some of your own if you can do!

In Bath people will be taking action outside the central poundland from 3.30pm on Friday 22nd. Facebook Event

All week there are online blockades of charities using the scheme, see the boycott workfare website for details! If you’re not going to be in Bristol or Bath this weekend get along to one of the other national actions or call your own!

See you in the Streets!