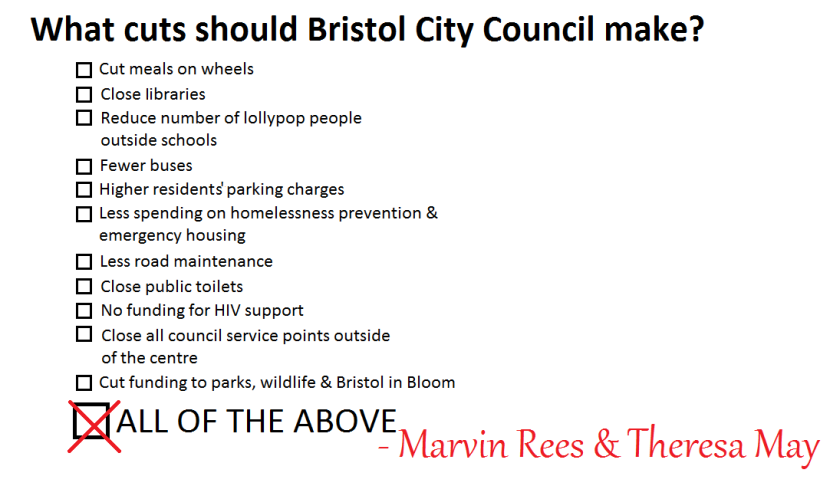 Think it should be none of the above? Then join us in the streets this Saturday & Tuesday!

The fight against cuts has been a long and tough one, but we can’t afford to let up. Not when peoples’ livelihoods, well-being, and very lives depend on it. It won’t end with the upcoming protests (see below for details). In fact, it will need to step up a gear in the months afterwards, if it is to have any impact.

The government in Westminster continues to demand cuts to essential services, still telling the same old lie that it is for ‘the sake of the economy’ or to lower the national debt. The reality of the past seven years says otherwise. Councillors across the country have spoken about being ‘anti-austerity’, but so far have only put their careers and the easy life first, passing on the cuts, regardless of which party they belong to.

In reality, these cuts are an attack on working class and vulnerable people across the country. It’s about giving less of the wealth that we produced to us – whether we receive it in our wage packets, our benefits, or our access to state services – and giving more of it to the few at the top. Privatisation goes hand-in-hand with this, creating yet more profit for the millionaires, and it’s all the easier to implement when services are already stretched to breaking point.

So, what can we do about it?

First off, join the protests !

Saturday (18th) at College Green.
Gathering at 11am, marching from 11.30am
The last chance to show our opposition, before the councillors start their budget setting meeting on Tuesday.
Facebook Event

Tuesday (21st) at College Green.
Gathering from 5pm until late, to surround the councillors inside.
They’ll be busy voting through these devastating cuts, and we shouldn’t give them an easy ride!
Facebook Event

If you are unable to attend the events in person, help spread the word online, contact councillors, and speak to those around you.

Secondly, join us for the long hall! Get in touch with us, or the Bristol and District Anti-Cuts Alliance (BADACA). BADACA has been bringing together community groups, trade unions, and political organisations to stand up for our communities and the services we need since 2010, and we’ve spent the intervening years fighting alongside them. Get in touch: admin [AT] bristolanticutsalliance (DOT) org [DOT] uk

Finally, and most importantly: fight where you are. Do you work in or use a service that may be hit? Have friends and neighbours that do? The cuts are so far reaching that there are few of us that won’t be, or haven’t already, been hit by them.  Link up with your colleagues, link up with users of services, and get organised. Axing your bus route? Leaflet the stop! Cutting staff? Organise and strike! Cutting your meals service? Get together and protest! Closing your local service point? Occupy the building!  There are endless chances to fight back – it can be daunting, but by working together, nothing is insurmountable. By linking the struggles, we strengthen all of them, and the larger fight against capitalism.  We – and others with a bit of experience as activists – will offer you all the practical help and solidarity we can.

Despite the continuing austerity measures, small victories have been won: concessions made, services kept open longer, changes made to help ordinary people. We need to build on each one of these, and make every cut as hard as possible for the politicians. After all, when they think about how many new cuts to make, they’ll look at how hard the last ones were to push through. So let’s make sure they have to think really damn hard. 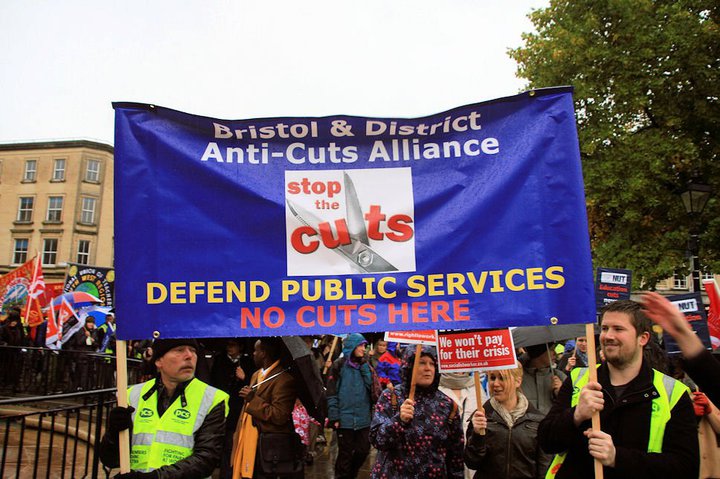